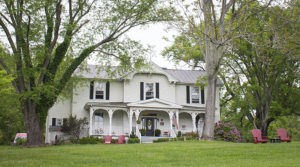 So we load up not one, not two, but three moving trucks to bring the contents of our Pittsburgh home to a completely furnished property in Lovingston, Virginia.  Prior to the move, we donated countless things to AmVets (they came to our house bi-weekly for several months), sold several pieces of furniture, and even rented a dumpster for a week.  It was overwhelming preparing to pack up a house that we had loved and lived in for fifteen years.  Mike was definitely questioning my sanity as we carefully packed up one thing after another for the move, but I had a very specific vision for how and where I would use all the items we had accumulated over time.  I was constantly decorating in my mind!

The first week in our new place was beyond insane.  We set up shop in the quaint little farmhouse, as the former owners continued to live in the new innkeeper’s suite so we could “shadow” them for the week.  In between training sessions, we would walk down to the barn and haul up boxes to unpack.  We tried to unload between 10-15 boxes every day.  By dinner time, we were both so physically exhausted that we were achey.  We were both losing weight already from the nonstop movement and walking back and forth on the property constantly.  We would hit the pillows tired beyond belief, but also happy.  We had a dream that was coming true and we were both very excited.

There was more that was overwhelming:  the phone would ring and we were hip-deep in unpacking and would need to stop to take a reservation or answer questions.  I was starting to worry about when and how we were going to plan the breakfast menus, grocery shop, and make the fresh cookies that were to await each new guest.  We needed help and there was a staff of two:  Mike and me!  The 14 acres needed to be mowed, the vineyard vines needed to be “tucked”, the pool needed to be cleaned, the rooms needed to be prepped, and there was no end in sight.

But then our very first guests walked through the door and we knew immediately it was going to be the best “jobs” we ever had.  They were so friendly, appreciative, complimentary, and wonderful.  We loved giving them the welcome tour, and helping them get settled.  They affirmed for us both that we had made the right choice and that we were perfect for this new adventure.

Quickly, we settled into a manageable routine.  As the stack of moving boxes dwindled, we could contemplate taking on bigger projects, like painting and landscaping.  Within three weeks, we were completely unpacked and it was starting to look and feel like HOME.

Next up:  a day in the life of an innkeeper!